The troubles and irregularities in Ankara’s mayoral election keep piling up.

A recent article in McClathyDC has many interesting points. It notes that around a quarter of all ballot boxes arrived at counting centers without an official stamp from the election board:

The case of the missing stamps are not isolated events:

Tally sheets that lacked the official stamp were a major irregularity. Other means were more subtle. An example was the redistricting decided by the AKP-ruled Parliament in a late-night vote in 2012, which moved conservative rural municipalities into CHP-leaning districts in the city of Ankara for the mayoral election. The CHP also charged there had been at least 53,000 duplicate registrations; that out of 124,000 votes that were voided, 100,000 had no reason stated; and some 450 tally forms had their contents incorrectly entered in the official database. The total the CHP says it lost is at least 120,000 votes, possibly double that.

As the counting went into the night of March 30-31, top government officials are reported to have descended on the counting center in one of the most crucial districts, Yenimahalle, and staying in one instance for hours.

But equally worrying is the manner in which complaints launched against the election procedures have been dismissed by institutions responsible for the fairness of elections – the local, provincial and supreme election boards, have so far dismissed all of the CHP’s complaints in Ankara.

The question raised by the seemingly skewed oversight is whether the upheaval in Turkey’s judiciary that Erdogan embarked on after the scandal broke – the reassignment or sacking of prosecutors and the threat to remove judges who are associated with moderate U.S.-based Islamist cleric Fethullah Gulen – has intimidated the election boards, whose voting members are all judges.

“The government has not yet replaced the judges on the Council of State (the highest administrative court) nor the Supreme Council of Judges (which assigns judges to courts), but there is a sword of Damocles hanging over them,” said Muyesser Yildiz, a veteran Ankara journalist who works for Odatv, a Web-based independent Turkish news service. “Who could have the courage now to do anything against the government?”

In this atmosphere, where judges may not dare to act in any way against the government, a small source of optimism can still be found in the activism of citizenship initiatives, like that of Ankaran’in Oylari (hereby, AO) in Ankara. Today, thanks to the activities of AO’s may volunteers, we actually have data on some of the above stated irregularities.

After the elections, volunteers from AO went thru images of the vote sheets associated with individual ballot boxes. Their efforts not only showed an absence of the official stamp on a quarter of these sheets but also extensive irregularities in recording invalid ballots. A related website contains images of all the ballots, many which have extensive issues. Below are two examples with inconsistencies, one with, and one without the official stamp. Neither of the vote sheets properly records the invalid ballots (in the upper right corner).

AO (and especially Emre Koyuncu) was kind enough to share with me their data regarding both stamps as well as improper recording of invalid ballots. These are two variables, one a dichotomous variable indicating the absence of a stamped ballot box, and the second is another dichotomous variable indicating the presence of improper recording of invalid ballots. These have been matched with the ballot box voting data from the CHP-STS dataset (described in earlier posts here and here).

At first, I plot the ballot box-level votes for AKP and the CHP below, with red (black) dots indicating an unstamped (stamped) ballot box in the left-hand side graph, and with improper (proper) recording of invalid ballots in the right-hand graph.

The two graphs show ample occurrences of the different types of irregularities on both sides of the political spectrum, and the different types appear to be far from perfectly correlated. For example, unstamped ballot boxes (in the left graph) appear more common among the smaller-size boxes, likely the more rural and AKP-leaning parts of Ankara (which has been discussed on this blog before here, and documented by Murat Eren are also more likely to have abnormally high turnout).  Cases of improper coding of invalid ballots (the right-hand graph) are to a larger degree concentrated among the more populous districts which predominantly tend to have capped-out ballot box sizes (300).

Is there any indication that ballot boxes with more irregularities tend to shift the distribution of votes in a particular way? To shed som light on this I graph the distribution (kernel density) of the AKP-CHP vote margin (equivalently the AKP vote share minus the CHP vote share) for those ballots that 1) have stamps versus no stamps (left) and 2) have documented complaints over recording of invalid ballots or not (right). 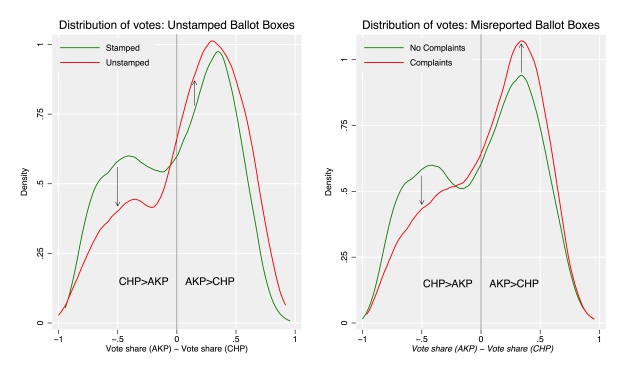 In both the left and right graphs, moving from regular to irregular ballot boxes appear to shift the distribution in favor of the AKP. Among the respective samples with documented irregularities, there are much fewer ballot boxes favoring the opposition party CHP and many more favoring the AKP.

The occurrence of such large quantities of irregular ballot boxes should be of concern out of principle. But if irregularities were clustered in districts that were more likely to feature recording and procedural mistakes, like the poorer more rural districts who might vote for the AKP regardless, this may not necessarily have an impact on the election. However, as the two below graphs show, many of these inconsistencies occur in the larger and richer districts of Ankara, and those that tend to favor the opposition more. The concentration of irregularities in Çankaya – a bastion of the opposition – as well as some of the swing districts, is concerning.

As before, this analysis cannot conclude that there has been systematic fraud. Yet as the irregularities keep piling up, it would appear a no-brainer that the election for metropolitan mayor in Ankara needs to be properly investigated for vote rigging. Some of these irregularities may have biased the results, an example being the systematic correlation between invalid share of ballots and the AKP bias I’ve documented here and here.

It is rather surprising that the Turkish election board, YSK, has accepted the large number of voting irregularities in Ankara and rejected calls for investigation, when in other cities these have been awarded after complaints. What appears to be rather arbitrary rulings of recounts and re-runs could be inherently linked to some of the irregularities. Whereas some of these may have acted to bias votes towards one party or another, other irregularities may have provided the authorities with a safeguard, an excuse to declare elections invalid should the votes not fall in their favor.

As such, the reason why Ankara’s (and probably many other) local elections need to be investigated for vote rigging, is not necessarily that mechanisms have systematically biased electoral returns toward the government, but that these allegations going unanswered will only further erode the democratic fabric and trust in the country’s institutions. Until the authorities take the responsibility for investigating these claims, citizenship initiatives like the AO in Ankara, Oye ve Ötesi in Istanbul, will continue to play a crucial role in verifying election results. If there is a silver lining here, it is the mushrooming of these initiatives, a sign that Turkey’s citizens are ready for democracy, even if their government isn’t.

8 thoughts on “Capital Fraud in Turkey? Evidence from Citizen Initiatives”