Since the referendum last Sunday, there has been much discussion over the relatively high support for the YES-vote in Turkey’s predominantly-Kurdish Eastern part of the country. To give a quick visualization of it, the below graph on the left-hand side shows the difference between the number of YES votes in the referendum and the number of AKP votes in the last (November 2015) parliamentary election, by geographic (NUTS-1) regions. (These numbers are not official data so maybe updated slightly).

The largest increase can be observed in Southeast Anatolia, but Central East and Northeast Anatolia are also among the top regions where the AKP(‘s amendments) gained the largest increase in votes. These three Anatolian regions added circa 570,000 votes (the smaller number reported in my previous post is from narrower subset of provinces) corresponding to ca 38% of the added votes nationally. This is especially noteworthy given that this area corresponds to just under 15% of the electoral population. 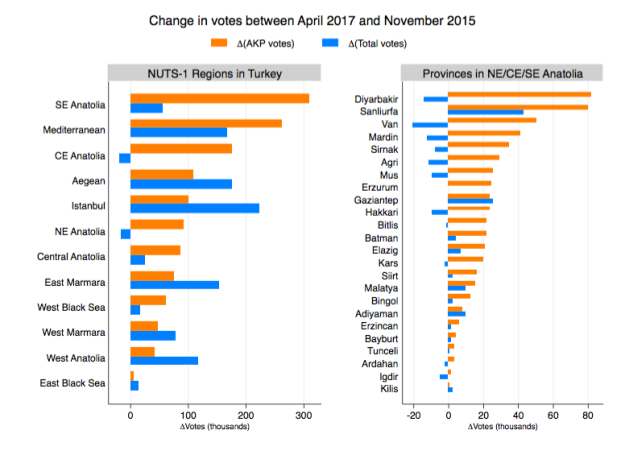 END_OF_DOCUMENT_TOKEN_TO_BE_REPLACED

There are a number of striking features of Sunday’s referendum in Turkey, which resulted in a narrow victory (51.4% being the official “YES” vote share at the time of writing this blog post) for the constitutional amendment proposed by the government.

There are, however, numerous challenges to the result, both with regards to the environment in which it was carried out as well as more direct accusations of election-day irregularities. Going through the election data is probably going to keep many people busy for the next couple of   months. For now, I wanted to highlight one particular phenomenon which struck me as interesting.

At a first glance, when plotting the vote share distribution of the YES vote at the ballot box level was that the “Never-AKPers” were gone. These Never-AKPers are voting groups that have extremely few or literally zero votes for the AKP. In past elections, they have been quite noteworthy. The below illustrates this by plotting the distribution of the AKP vote shares for the 2011, June 2015, and November 2015 parliamentary elections and in the bottommost graph the YES vote share in Sunday’s referendum.

Essentially, the fat left tail (i.e. the ballot boxes with next to zero AKP votes), which stands out in the previous three elections is almost entirely gone in 2017. What happened? Did the areas where the AKP was the least popular suddenly have a change of heart?

END_OF_DOCUMENT_TOKEN_TO_BE_REPLACED

A central challenge for the Turkish economy in avoiding falling into a middle-income trap is to achievea shift away from (what the World Bank has labeled) a “know-who” toward a “know-how” economy. The latter implies not just investments in education but also putting a more educated workforce to productive use.

The recently released employment statistics from the Turkish statistical institute showed two worrisome features of how unemployment has evolved over the last year, beyond the headline 1.9 percentage point jump in the unemployment rate from 10.8% in 2015 to 12.7% in 2016.

1) The increase in the unemployment rate is to a significant degree driven by individuals with higher education degrees, a group that experienced a 3 percentage point increase in the unemployment rate (see graph below). In contrast, less educated brackets show more modest upticks in unemployment. Arguably, this is different from a standard economic downturn which would normally affect blue-collar workers to a similar, if not larger, extent than white-collar workers. (Interestingly,  there’s also a 4.2 percentage point increase among vocational high school graduates.)

END_OF_DOCUMENT_TOKEN_TO_BE_REPLACED

A curious aspect of the new GDP series (which I’ve covered here, here, and here) coming out of Turkey is the divergence between GDP growth and the stock market. Whereas official GDP statistics shows higher growth during the 2010-2015 period than the preceding six years 2004-2009, the opposite is true for the Turkish stock market.

This can be seen from the data series published by Turkstat called “The Rates of Financial Investment Real Profits’, which tracks the real returns of not just an investment in the flagship BIST100 equity index of the Borsa Istanbul, but also investments in US dollars, the Euro, Gold, Government debt, as well as bank deposits.

The below graph shows real (inflation-adjusted) return indices for all of these asset classes between January 2004 to January 2017, with the base month set to January 2010. 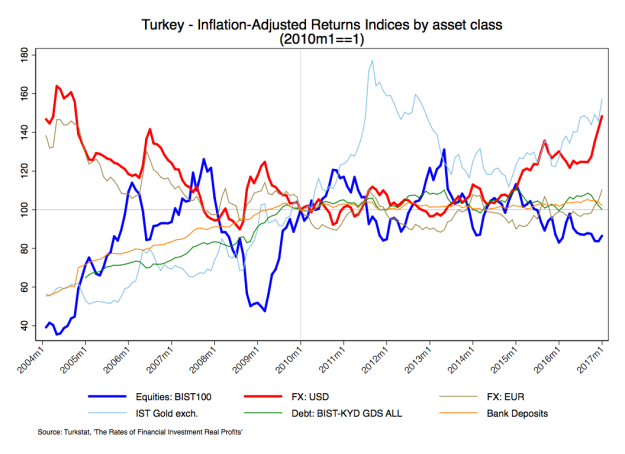 END_OF_DOCUMENT_TOKEN_TO_BE_REPLACED

The previous post focused the extent to which Turkey’s revised GDP data changed the recent history of economic growth in Turkey. A particularly striking fact of the new series is how much higher the growth rate in GDP in Turkey has been ever since the global financial crisis in 2008/2009. Of interest is then also how this changes Turkey’s economic performance in a comparative sense internationally, both in terms of economic growth as well as key economic indicators.

In this blog post, I take as the basis of economic performance the change in real GDP per capita obtained from the most recent October 2016 World Economic Outlook (WEO) from the IMF. For most of it I will show how this measure of economic growth – in two periods of six-year-averages for 2004-2009 and 2010-2015 respectively – correlates with a selected number of key economic indicators, most of which are included in the WEO database, and how much of Turkey’s (and other countries’) growth can be explained by a relatively simple regression model including a number of indicators of interest.

These indicators are: the natural logarithm of the average GDP per capita during the preceding six-year period, the natural logarithm of the average of population size during the preceding six-year period, the average growth rate in GDP per capita during the preceding six-year period, the current account balance as a % of GDP, the CPI inflation rate, the investment rate as a % of GDP, government debt as a % of GDP, and the unemployment rate. In addition, I also draw on the World Development Indicators database from the World Bank for labor force participation rate, domestic credit  to the private sector as a % of GDP, the age-dependency ratio, the urbanization rate, and from the IMF’s Balance of Payments database I also add the net international investment position (NIIP) as a % of GDP. For the investment rate, private credit, urbanization, and the NIIP-to-GDP measures, I also include a change variable with each measured as the change between the average during one six-year period and the corresponding average of the preceding six-year period. The IMF WEO indicators are quite standard and hopefully require little introduction. Most of added variables from the WDI are a bit Turkey-specific as they will show Turkey’s comparatively low labor force participation rate, the rapid growth of private credit in the economy, and the change in urbanization serving as a proxy for factor that could drive some of the large construction investments apparent in the new revised GDP series for Turkey. END_OF_DOCUMENT_TOKEN_TO_BE_REPLACED 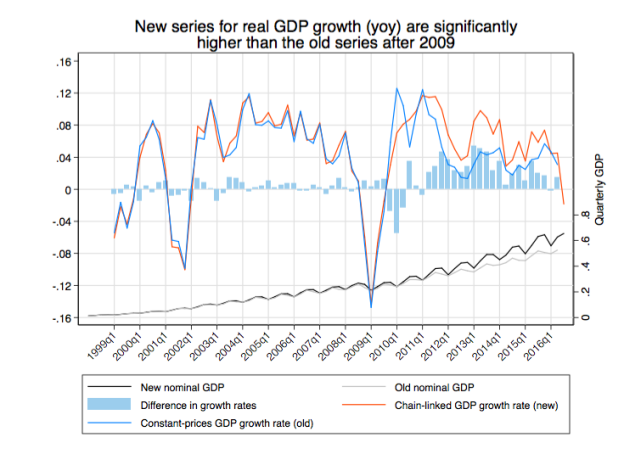 The changes to Turkey’s GDP and growth rates are very large ones not only from an absolute perspective, but especially so in comparison with other cases of ESA (European standards) or SNA (United Nations standards) revisions. In OECD countries, such revisions have tended to have much smaller impacts on the levels of GDP and, at least on average, close-to zero effects on GDP growth. In most of these other cases, large revisions tend to be driven mostly by the changes in standards themselves, although in some of them, wider changes in how statistics are collected were more dominant. END_OF_DOCUMENT_TOKEN_TO_BE_REPLACED

Erik Meyersson
Create a free website or blog at WordPress.com.