I recently ran across this old New York Times editorial, A Turkish Success Story, from January 28, 2004. It’s rather striking as it heaps praise over Erdogan even as he’s only been in power for less than a year:

Under the leadership of Prime Minister Recep Tayyip Erdogan, an Islamic politician who favors democratic pluralism, it has enacted far-reaching reforms that are intended to meet the exacting admissions criteria of the European Union. Mr. Erdogan, who visits the White House today, is a strongly pro-Western leader

[Erdogan’s] ruthless ways and his attempt to crush dissent are not new…. [his] actions trample on democratic reforms… and [is] increasingly at odds with… NATO.

and then another couple of months to October 31st 2014, to this:

“These days Mr. Erdogan stands for something quite different, having essentially pulled a Putin..”

In 10 years, NYT’s perception of Erdoğan has gone from pro-Western democratic pluralist to being Putin. Not many leaders of state have been able to accomplish that.

You’d imagine that such a huge shift in perceptions of one man would take years to develop. Well, not at the NYT. What is also unusual is that the NYT’s editorial team coverage of Turkey seems to have remained mostly positive until very recently – a recent article in Hürriyet Daily News showed, using a textual analysis that the NYT editorials that “[d]espite the speed of his decline in popularity, the New York Times largely continued to refrain from negative coverage about Mr. Erdoğan” except for parts of 2013 and most of 2014.

NYT isn’t alone in its very recent perception pirouette – most mainstream outlets today tend to stumble over each other noting Turkey’s authoritarian turn, crackdown on media freedoms, and it’s leader’s taste for being on the front page of every single newspaper (ever). In some cases the changes – not just in text but also in everything else – have been less than subtle. See below comparing one article published in Foreign Policy Magazine in mid-2011 with another published end of 2013: 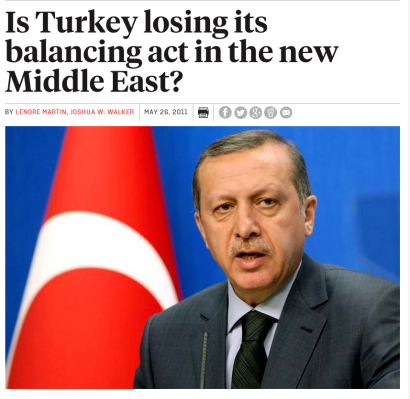 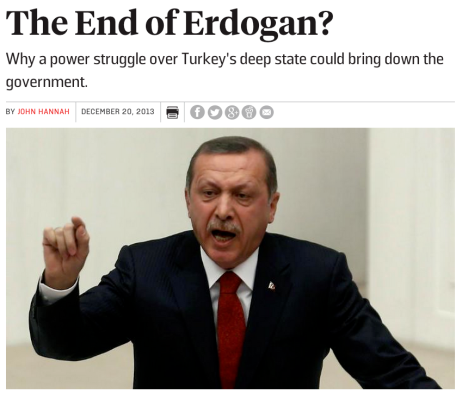 On the left-hand side, an image of serious reflection. On the right-hand side: rabies.

All of this must have been quite a change for editors and journalists who up until fairly recently were harmonically repeating glorious talking points combining into the beautiful song that was the Turkish model. Some of these talking points were repeated to the extent that it became almost comical. For example, take this list of op-eds referring to Turkey as a “vibrant democracy” composed by Okan Altiparmak:

“, a vibrant democracy that in spite of its imperfections is seen as an example of reform in the region” (Is Turkey Losing Its Balancing Act in the new Middle East, Lenore Martin and Joshua W. Walker, FP, May 26 2011)

“… remains a shining (and rare) example in the Muslim world of a vibrant democracy with the rule of law” (Is Turkey Turning its Back on the West?, (Author unspecified), The Economist Oct 21, 2010)

What’s noteworthy is that most of these articles are voicing concerns over Turkey moving away from the West, while at the same time describing Turkey’s democracy as vibrant. I’ll return to this later.

It’s unclear who first created this talking point for Turkey, although President Obama did refer to Turkey as a “strong, vibrant, secular democracy” in his speech in his 2009 speech in the Turkish Grand National Assembly. The fact that this description was preceded by “[Atatürk’s] greatest legacy is [a]…” is not without irony. The former obviously caught on – the latter not so much.

There are of course other talking points, such as the recounting the AKP bringing the military “to heel” without then also noting the amount of dirty tricks that brought this about. There’s also the one that is less a talking point than a declaration of stupidity economic illiteracy: the tripling of Turkey’s GDP (see here for Turkey’s Finance Minister, here for The Economist, and here for The Economist… again).

An interesting exercise is to try to see when the media tide on Turkey turns negative. A couple of things suggests this may have occurred sometime as late as mid-2012 to end of 2013. For example, one commentator produced the following statement in mid-2012:

“AKP has done everything that it can… to forge… a more democratic, open country”

and, around one-and-a-half years, in January 2014, later wrote this:

There’s also been a rash of reports and op-eds from Gülen-affiliated sources stating that things were moving forward up until 2011, and things went bad after that. See for example, this statement in a recent report by Rethink Institute in DC (bold text below added by me):

Before 2007, there were certain areas, such as secularism and ethnicity that were off limits. Media outlets and journalists delving into these issues faced pressure from the government or the military, but it was possible to take a critical stance against the government on other issues. When the military’s influence in politics diminished with the coup/conspiracy trials of Ergenekon and Balyoz, taboo issues ceased to exist…. However, since 2010, Turkey has experienced  gradually increasing blanket repression of dissent.

Also, see this piece from last week, in the Washington Post’s Monkey Cage blog (of all places), where it’s so important for the author to note the timing that he has to do it twice:

“It is true that [Erdogan] further liberalized the Turkish political system in 2002-2011, but since then he has turned increasingly authoritarian and corrupt”

For Gülenists, timing is important, and it is no coincidence that they would like you to think things were going fine and then went bad around 2011/2012. It is after 2010 that its conflict with Erdogan begins to come up to the surface, with the summoning-to-court of Turkish intelligence chief Hakan Fidan over peace talks with the PKK, the early purge of Gülenists around 2011, and the escalation of these purges in 2013 within the bureaucracy and security apparatus. Acknowledging the abuse of state power in the earlier period would mean accepting part of the blame, as they themselves had a hand in the wrongs committed, especially in the tainted trials of Balyoz, Ergenekon, KCK, as well as the establishment of a “climate of fear” among many journalists, academics, and others.

But it would probably be an overestimation, and oversimplification to allocate the turn of the media tide to Gülenists alone. There may be several other reasons why the international media’s love story with Erdogan’s Turkey ended, having to do with the AKP and Erdogan’s increasing antagonism toward Israel, rapprochement with Iran and China, as well as the support for anti-Western rebels in Syria and Iraq (some of which I’ve touched on here).

Equally important, however, is the point that Turkey’s political and democratic problems were already there to see for those who looked long before 2012. A crackdown on media freedom, the slide in judicial independence, arbitrary arrests of dissidents, all these phenomena were well under way even as the FT, the NYT, the Economist and others were calling Turkey a “vibrant democracy” (see here for a piece Dani Rodrik and I wrote in Foreign Affairs for more on this). Never mind that a change to Turkey’s anti-terror laws in 2006 paved the way for its coming political inquisitions, or that numerous amendments to procurement laws gave the AKP government the power to start using public procurement for political purposes, a central building block of the corruption it is accused of today.

This doesn’t mean that there weren’t alternative views, articles, and opinions stating the opposite at the time, but they never seem to have been given the space they perhaps deserved. This is likely a consequence of the demand for stories, not the supply (with a few exceptions). During the last couple of years, I’ve come to know several of the usual suspects in journalists reporting on Turkey. Many of them know three or four times as much as I do, have had a great sense of what’s been going on, and it’s become more and more my opinion that the problem lies with the demand side of the stories: the editor’s room. And through the editors come the choice of op-ed writers, which I’ve lamented on before (see here).

Today a different message is sent out, one of an authoritarian turn, portrayed as brought about almost exclusively by Erdogan himself, after a previously promising period of democratic progress. Yet this authoritarian turn argument seems to have arisen mostly as an afterthought, a useful argument to bash a Turkish government increasingly unwilling (or unwelcome) to move closer to the West (with all that implies). This can be seen in the above mentioned articles, where expressed concerns over Turkey’s Western affinity doesn’t prevent the authors from repeating previous talking points, thus undervaluing concerns over the country’s democratic deficit. This new talking point precludes much afterthought of whether previous evaluations of Turkey as a vibrant democracy as it focuses on portraying recent authoritarian tendencies as a recent phenomenon. And so one bad talking point complements another.

There are shelf-lengths of books to be written about what a lies behind the failed opportunity for Turkey to realize its democratic potential over the last decade. But there’s also plenty of room for analysis of what went wrong in how the international media has written and editorialized on this. Erdogan may or may not have gone from a “pro-Western democratic pluralist” to “being Putin” in ten years, but few today doubt the seriousness of the erosion of checks and balances and the strain on Turkey’s democratic fabric. The question is to what extent some mainstream media outlets served to cloud this adverse development behind a mountain of talking points – and deliberately or not – acted not to inform but more to affirm an already held view. A view that is now swinging to the opposite, to be replaced by another set of talking points. And so a flawed narrative continues.

(This is an expansion of a short speech I gave at ABF Stockholm’s recent seminar on Turkey on November 19th.)

1 thought on “Tired of Bad Talking Points on Turkey”