Many were taken by surprise by the announcement of the Kurdish HDP’s to run as a party in the upcoming 2014 elections, as opposed to running as independent candidates, which it has done until now. Running as independent have been the Kurdish political movement in Turkey’s way of circumventing the draconian ten percent threshold, which excludes parties from representation in the Turkish parliament if it fails to win more than tern percent of the national vote share.

The HDP candidate Selahattin Demirtas did receive nearly 10 percent of the vote in the last (presidential) elections, but given it’s 2011 vote share of ~7 percent, and opinion polls putting HDP at roughly 6-8 percent, it seems a rather tall order to expect HDP to pass the ten percent threshold needed for any parliamentary representation. Most likely it will fall below that, and if it has then run as a party, it will not receive any votes at all. These votes will then almost surely fall into the hands of the ruling AKP, likely giving it the supermajority needed to rewrite the constitution. In this case, the Kurds are dependent on the AKP to use its borrowed Kurdish votes to run through the institutional changes needed to accommodate Kurdish preferences. Failure to do so could result in another lost opportunity for Kurds to achieve institutional equality in Turkey.

As such, the HDP strategy is quite a gamble.

Several people more qualified than me have now written about this (see for example, recent articles by Amberin Zaman’s in Al-Monitor, as well as Gareth Jenkins in The Turkey Analyst).

What I would like to do here is to illustrate how dependent the Kurds are on the AKP to follow through on Kurdish enfranchisement in the event that A) the HDP fails to get representation as a party and B) AKP accumulates enough votes and the parliamentary mandates needed to alter Turkey’s ailing 1982 constitution unilaterally.

In order to do this, I’ve set up a very simple game tree, using software called the Game Theory Explorer. The game has the following setup:

The game tree is below, with moves and payoffs in red for HDP and blue for the AKP. 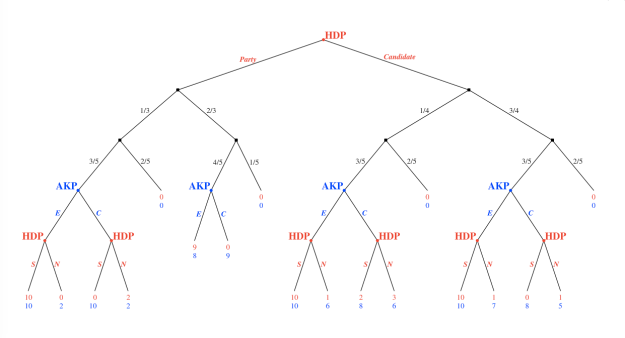 The top node shows the HDP’s decision of either running as a party or running as candidates. The following two tiers of nodes in squares denote chance occurrences: the first tier of chance (square) nodes represents the probability that HDP gains more than ten percent of the votes occurring with an assumed probability of 1/3 if it runs as a party, and a probability of 1/4 if it runs as independent candidates. (I’ve assumed that the likelihood of gaining more than ten percent is higher if HDP runs as a party)

In those cases where the AKP fails to gain a supermajority, the game ends, and in these cases I’ve assumed both the AKP and the HDP get status quo payoffs of 0 each.

Whenever AKP gains a supermajority, the game continues and AKP has to choose whether to Enfranchise or Cheat the Kurds in their new constitution proposal. After this is done, the HDP moves last and has a chance to Support or Not support the draft.

I have assumed that whenever HDP gains more the ten percent of the votes, any supermajority for the AKP to change the constitution is then conditional on HDP supporting it. In the event where HDP fails to get ten percent as a party, the supermajority is AKP’s alone. In the cases where the HDP runs as independents, I’ve assumed the AKP can still ram through constitutional changes without enfranchising Kurds, but would then seek help elsewhere, with a lower payoff of itself as a result. 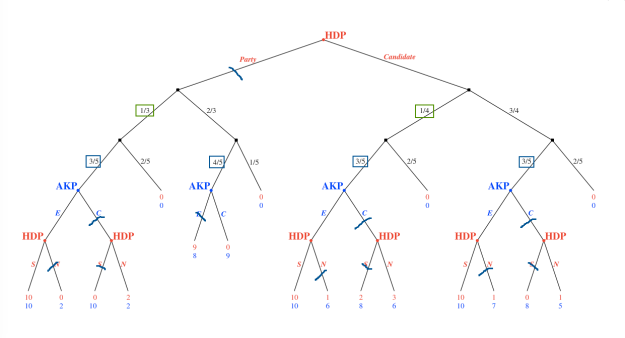 In the above graph, I have crossed over all the moves that are dominated for the HDP in the bottommost nodes, as well the dominated moves by the AKP given what the HDP is expected to do. For example in the bottommost left hand node, the HDP will choose to support a constitution that enfranchises the Kurds, and anticipating this, the AKP will always enfranchise the Kurds to get the highest payoff.

I’ve structured the payoffs such that both AKP and HDP always gain the maximum payoff of 10 whenever AKP gains a supermajority while enfranchising the Kurds and geting HDP support. I’ve also assumed that HDP gains a higher payoff when it refuses to support a Cheating AKP proposal than if it should support such a proposal. In the situation where HDP ran as candidates but got cheated by AKP, it still gets a nonzero payoff due to its parliamentary representation.

The question is, given the payoffs and the best strategies in the lower nodes, is it better for the HDP to run as a party or as independent candidates? The answer to this depends on the expected payoff from these two strategies, and can easily be calculated as following:

With the above assumptions and the payoff structure, running as independent candidates is clearly the dominant strategy for the HDP.

For those with some game theory knowledge will quickly see that this is a “cooked” game. I’ve assigned a higher payoff to the AKP of cheating (9) than enfranchising the Kurds (8), meaning it will always choose cheating in this node. If we reverse the payoffs so enfranchising gets 9 and cheating gets 8, the expected payoff is now 1/3*(3/5*10+2/5*0)+2/3*(4/5*9+1/5*0)=6.8. In this case, running as a party would be the dominant strategy.

The game as I’ve laid it out has arguably a number of simplifications and assumptions attached to it that can be altered. But the main point here is to illustrate the crucial situation where A) HDP fails to surpass the threshold and B) AKP can essentially push through a unilateral constitution. In this case, the AKP’s incentives may end up looking very different than the ones it faces today.

With the power to unilaterally alter the constitution, why should the AKP then enfranchise the Kurds? Well, for one, it may have unofficially promised to do so. It may also want to appease the Kurds, to end the conflict with the PKK, and it may want to avoid an escalation of the conflict which could potentially further destabilize its southeastern part.

But any unilateral enfranchisement of the Kurds would also mean the AKP faces a future electoral cost. There are certainly many Turkish citizens who wish to see an end to the conflict, and who wish for Kurds to have their rights better cemented in a new constitution. But there are also going to be a substantial voting segment who will see such a move as concessions to the PKK, which is still seen as a terrorist organization. Thus, any unilateral enfranchisement of the Kurds risks electoral losses among AKP’s nationalist segments in the future.

The alternative for the AKP, then, would be to write a constitution more closely focused on its own preferences, keeping parts of the Turkish-Islamic synthesis vested in the past constitution to the Kurds’ chagrin.

The AKP may today, ex ante, proclaim its steadfastness toward enfranchising the Kurds, but should it end up with the power to unilaterally change institutions in Turkey more broadly, I fail to see the commitment device that would force AKP’s hands into not cheating the Kurds of institutional equality.

One missing element in the above exercise could be that parliamentary mandates are underestimating the true political power of the Kurdish political movements. Kurds may run for elections, and the seats they win do vest them with political power, but it is in threat of escalated demonstrations, and the possibility for violence that is likely the real stick. The payoff I assigned AKP to in the case where it alone can change the constitution may be too large if the PKK restarts the insurgency and all hell breaks loose.

But this assumes that the PKK would follow through on this. It may say or indicate it would today, but come that time, the PKK and all its affiliated acronyms would stand a lot to lose. At the moment, it has a working relationship with the US through its Syrian contingent in fighting the Islamic State. Any renewed violence on the party of the PKK would jeopardize that, and would likely shift the Kurdish center of political power back toward the Barzani movement in Iraq.

Also, the PKK’s insurgency in the 1990s may have initially been rather successful on the part of the PKK, because many parts of the Turkish armed forces (TSK) were ill prepared for such a conflict. Today, things are different. Better technology – and years of counterinsurgency training –  of TSK forces etc. all mean the PKK would be significantly outnumbered on almost all sides. It’s also not clear how prone the Kurdish population is to reengage in massive demonstrations, putting more of their children at risk of being killed by security forces.