(Note: This post has been updated to 1) add Istanbul to the provinces where Kurdish parties were active in 2011, 2) adding the other large cities Ankara, Izmir, Bursa, and Adana to the neighborhood-level analysis, and 3) adding graph of partial correlation between Refah vote share in 1995 and HDP vote swing in 2015.)

Given yesterday’s tumultuous election in Turkey, I thought it might be a good idea illustrate using the data available what just happened.

There’s the obvious: AKP lost about 10 percentage points of its vote share, and the Kurdish-and-what-not HDP received around 13 percentage points, pushing it above the ten percent threshold, allowing it to take seats in parliament – as far as I know, the first time a political party with such a clear pro-Kurdish constituency has done so. This means AKP’s seats in parliament fell from the 327 it won in 2011 down to 258.

Then there’s what it all means, which there’s no way I can discuss in one post. Instead I want to focus specifically here on the HDP and what kind of electorate brought it above the ten percent threshold.

Some herald Demirtaş. the HDP, and its electoral success as the comeback of the left or liberalism (here and here), noting amongst others his supportive stance toward the LGBT community as well as his background as a human rights lawyer. It is not for nothing that many refer to him as “Kurdish Obama”.

A following question is then to what extent HDP’s electoral success is a manifestation of the voting power of progressives and liberals in Turkey?

Despite talk of “borrowed votes”, i.e. strategic voting by (I assume) predominantly traditional CHP supporters, an initial look at the election suggests that what pushed HDP into parliament was a shift among traditional right-wing voters – the socially conservative Kurdish communities in the East and some living in the large cities who abandoned the AKP for the HDP.

To illustrate this, below I focus mostly on party vote shares and how they changed between yesterday’s 2015 parliamentary and the last 2011 election. For AKP, CHP, and MHP, this is straightforward as they all ran as parties in 2011. For HDP it’s less so, as many of its members then ran as independent candidates. For this purpose, in the case of HDP I use the difference between HDP’s 2015 vote share and the sum of vote shares of all independents 2011 in that province, if the province is one where Kurdish parties have historically been politically active (in which I include Istanbul as there were three Kurdish candidates elected there in 2011). If the province is outside this region I use the 2015 vote share. At first, I aggregate vote shares by province in the following graph, which is ordered by the AKP’s vote share difference between 2015 and 2011. 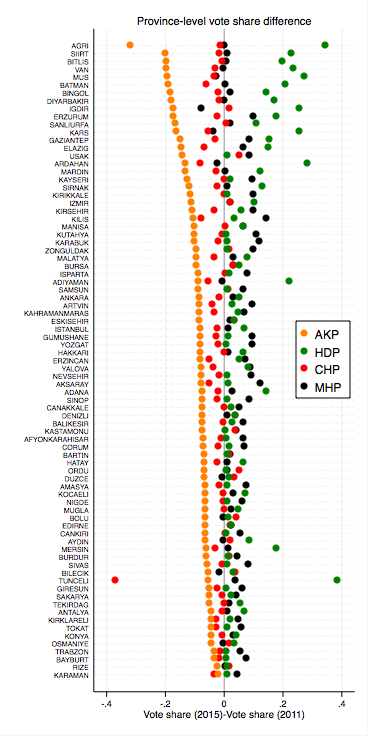 First of all, it shows how the AKP’s vote share shrank substantially in the Kurdish area, which were also those where the HDP did exceptionally well – here the swing is  almost exclusively one from AKP to HDP. An interesting outlier is Ağri, showing a landslide swing from the AKP to HDP of more than 30 percent. Another is Tunceli, the largely Alevi Kurdish province where the swing went entirely from CHP to HDP. In places like Mersin, Adiyaman, even in Adana, the losses commensurate to HDP’s gains were also somewhat shared with CHP. The figure further shows how the MHP did fairly well in many provinces.

This graph of the province-level vote swings would understate any swing within the large cities, and the below graphs speak more to that. These relate the changes in vote shares for parties between 2015 and 2011 in twoway comparisons: HDP vs AKP, HDP vs CHP, HDP vs MHP, AKP vs CHP, AKP vs MHP, and MHP vs CHP at the province level, where each circle is weighted by the square root of the number of valid votes in that province. Larger circles thus indicate more populous provinces. 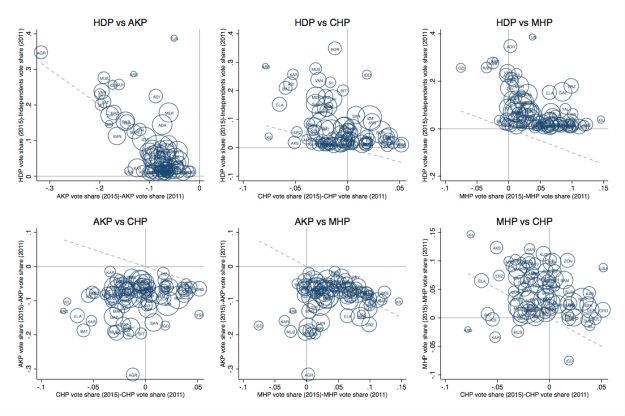 The upper left shows the relationship between AKP’s vote losses and HDP’s vote gains in the Kurdish provinces, but it also show a substantial vote shift in Istanbul and Izmir. (Especially the vote swing in Istanbul is important as this represents a million votes, or one sixth of all votes received by HDP). Points on the line indicate a one-to-one relationship: for example, each vote lost by AKP is a vote gained by HDP. Points above the diagonal line indicate that AKP losses only explain part of the HDP gains, and Istanbul, Adana, and Mersin are clearly such examples. Points below the line mean AKP also lost votes to parties other than HDP.

The upper middle graph shows some CHP votes going to HDP but at a much smaller rate. Most of the observations are above the diagonal line meaning the increase in HDP’s vote share is only partly coming from CHP, and the magnitudes on the x-axis are smaller too. The upper right hand graph plots  HDP against MHP, and reveals an almost L-shaped relationship, meaning the two parties respective vote gains were often relatively orthogonal to each other. The observations in the upper right quadrant , in places like Gaziantep, Erzurum, and Elazig, show that AKP often also lost votes to both HDP and MHP at the same time.

The lower left and middle graphs show the two remaining comparisons for the AKP against CHP and MHP. For the former it shows AKP and CHP both losing votes to other parties (the lower left quadrant) whereas in places like Bursa, Izmir, there were substantial shifts in votes from AKP to CHP. Also, in Rize and Ordu, the vote swings were near-exclusively from AKP to CHP, although marginal in magnitude.

In the lower middle graph, we can see that AKP lost substantial amounts of votes to MHP in places like Kayseri, Kutahya, and Manisa. In the final lower right graph, we further see evidence of a moderate but not insignificant swing on the nationalist spectrum with MHP taking votes from CHP in Aksaray, Elazig, Kahramanmaras, and Gaziantep to name a few.

Overall this shows that, across provinces, a substantial vote swing occurred from AKP to HDP with a comparably smaller province-level swing from CHP to HDP. This goes against the story that this election is about the rise of the left, as most would consider AKP-supporters right-wing (or at least, not left-wing).

This leaves the question of the large cities like Istanbul, Ankara, and Izmir. If we don’t observe any meaningful uptick in left-wing votes at the province-level perhaps we might observe this within the cities?

In the interest of time, I will here focus on Istanbul, which represents almost a fifth of all votes cast in the election and where HDP got a sixth of its votes. For this purpose, I below plot neighborhood-level (the lowest level I can match across elections) swings in vote share for Istanbul. As there were three independent Kurdish candidates  running in 2011, I use the 2015 vote share for HDP minus the independent candidates’ vote share in 2011. 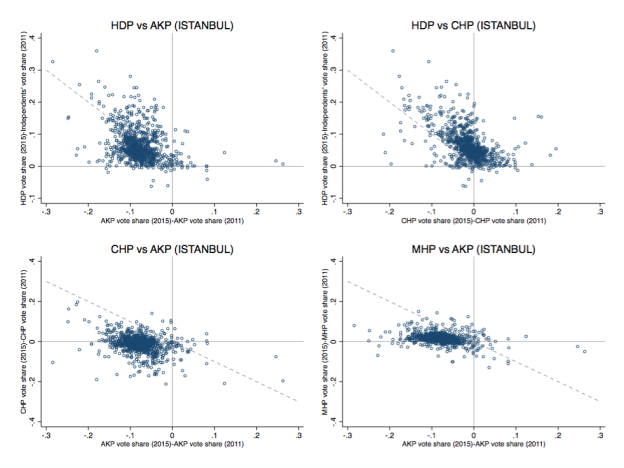 When comparing both HDP and AKP as well as HDP and CHP, it’s clear that HDP drew votes from both of those parties. Yet the HDP-AKP scatter plot (upper left) is centered more to the left than the HDP-CHP is (upper right) suggesting that, for most neighborhoods in Istanbul, HDP’s gains was to a larger degree associated with AKP, rather than CHP, losses.  As such, even within Istanbul, it’s hard to see clear evidence of switch among left-wing voters to HDP. Lastly, the lower left-hand graph shows the corresponding relationship between CHP on the y-axis and AKP on the x-axis. Overall, CHP’s vote share remained mostly constant (31% in 2011, 29% in 2015). It lost some votes to HDP but it also gained some from AKP. The lower right-hand graph shows little or no change in the MHP vote shares between 2015 and 2011.

We can do the same exercise for the largest cities after Istanbul, here Ankara: 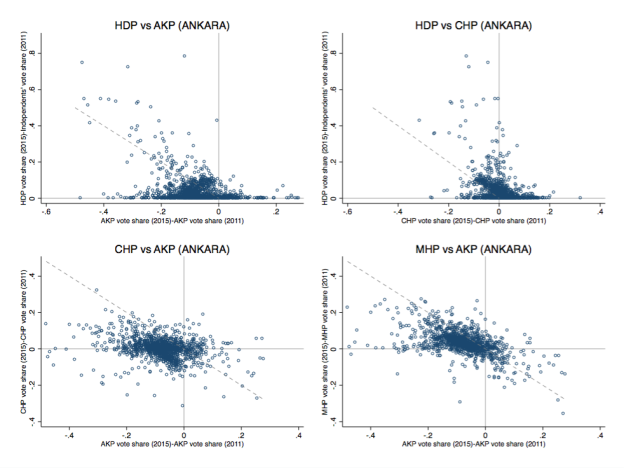 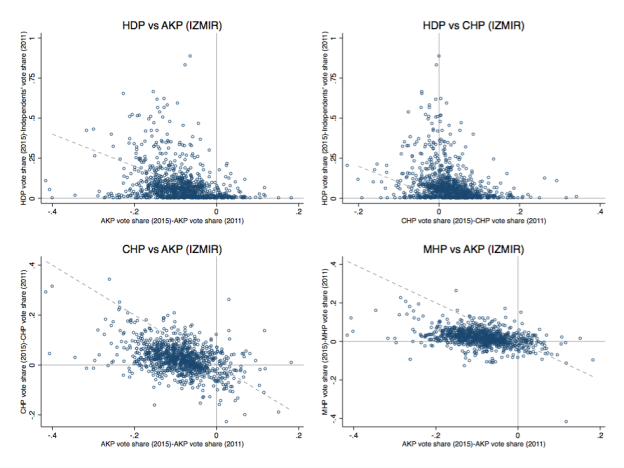 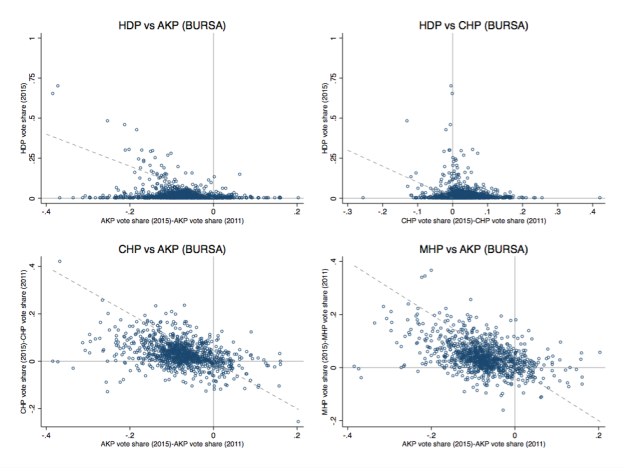 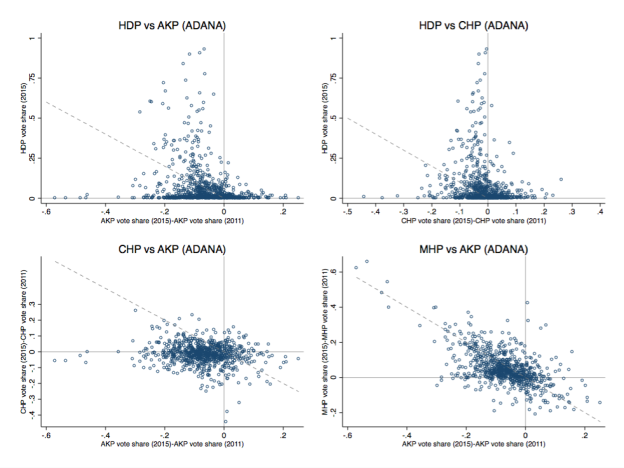 All of these show roughly the same phenomenon: HDP votes appear to come mostly at the expense of AKP votes rather than CHP votes.

Moreover, even though there was some increase in turnout (3 percentage points in total), especially in the Kurdish areas, these are marginal compared to the much larger vote shifts in favor of the HDP. This is illustrated by the graph below which plots changes between 2015 and 2011 in turnout as well as the HDP and AKP vote shares respectively. 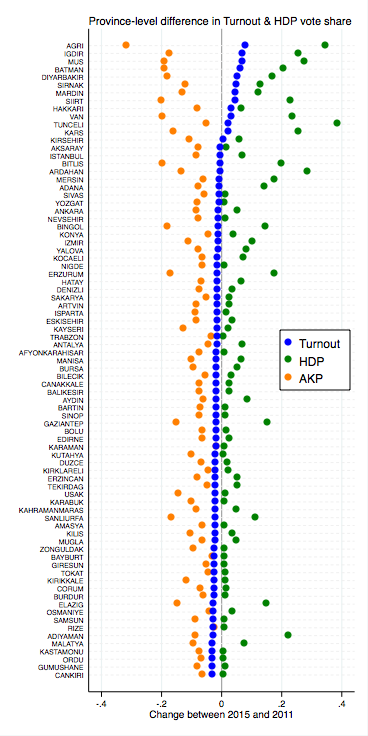 To see the extent to which the increased vote shares for HDP represents its winning over social conservatives, I below conduct a rather extreme test of this, comparing the HDP change in vote share between 2015 and 2011 against the vote share of the Refah Party in the 1995 national elections at the district (ilce) level in Kurdish provinces (using the same definition of a Kurdish province as above). 1995 Refah voters do not uniquely define all socially conservative but they do identify those voters willing to vote for an explicitly Islamist party. As such Refah voting in 1995 serves as a proxy variable for social – or in this case perhaps, religious – conservatism. Below, I graph the partial correlation (i.e. the regression coefficient of Refah’s vote share conditional on province dummies and a control for the log of the number of registered voters). 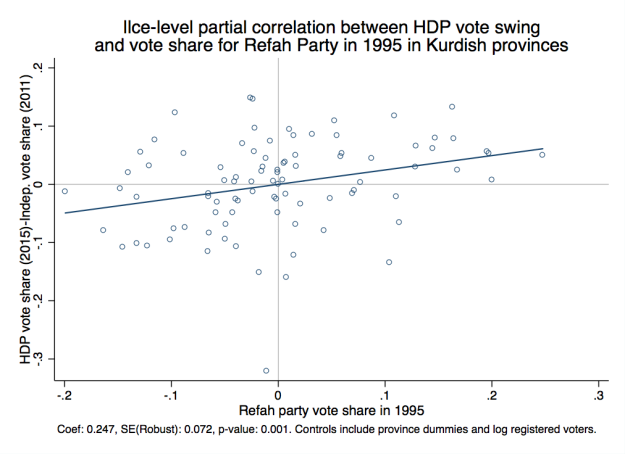 The graph shows a precise positive correlation between Islamic political preferences in 1995 and the HDP vote swing in 2015. One more percentage point in Refah’s favor in 1995 is correlated with a quarter of a percentage point swing to HDP in 2015. As stated above, this is a rather extreme test, as Refah could be seen as an very religiously conservative party, and only captures part of what it means to be socially conservative. Nonetheless, the positive correlation documented here is a clear indication that the Kurds aiding the HDP to power in the region were more likely of the pious, than the progressive, mindset.

The point of this exercise is the following: it’s unlikely that yesterday’s HDP’s electoral success represents some kind of revival of Turkey’s left, or its liberals. Much of the boost to HDP’s political clout instead seem to be coming from former AKP voters, both in the East and inside Turkey’s largest cities. Especially among the former, who were not already voting for the pro-Kurdish parties’ independent candidates, these are likely the ones AKP were able to win over catering to their religiously conservative values. Even in Istanbul (and to some extent also the other cities), the votes HDP won from AKP could also be made up of significant fractions of Kurds, although this remained an untested hypothesis at this point.

The success of the HDP, in my opinion, therefore remains mostly a Kurdish success. (And in many ways, it comes not a moment to soon that Turkey gets proper Kurdish representation in parliament.) As such, despite the liberal and leftist appeal of HDP frontpersons, they’re likely up for a significant challenge in steering a party that is secular and progressive at the top whilst pious and socially conservative at the bottom. And so, observers hoping that the Kurds will provide the liberal alternative that the existing Turkish parties have so far failed to provide, are likely to be disappointed.

Incidentally, there is already a liberal democratic part in Turkey, the “Liberal Demokrat Parti” (LDP). Yesterday, it received 0.06 percent of the votes. The quest for a liberal Turkey continues.