Earlier this year, the University of Gothenburg’s V-Dem institute released a new database on democracy. As it turns out, this database yields some new insights on the timing of Turkey’s democratic erosion, a topic I’ve previously covered (here, here, here, here, here, and here).

Here’s how Staffan Lindberg, the director of the V-Dem Institute, described the database to the Washington Post:

“Varieties of Democracy (V-Dem) represents a novel approach to measuring democracy. It is based on collaboration among leading scholars across the world and has two institutional homes: the V-Dem Institute at the University of Gothenburg in Sweden, which also functions as the operational headquarters for the project’s many parts, and the University of Notre Dame in the United States. V-Dem differs from previous datasets by distinguishing among different principles of democracy (as discussed) and offering about 350 unique democracy indicators, 34 indices of various aspects of democracy such as freedom of association, and five main democracy indices for Electoral, Liberal, Participatory, Deliberative, and Egalitarian democracy. These all cover 173 countries, measured annually from 1900 to 2012.”

Frankly, as a political economist (and all-out data nerd, for that matter) I have trouble expressing how exciting this is.

Of particular interest is the measure of liberal democracy, a topic of significant focus both globally (here, here) and specifically for Turkey (see here and here), but I’ll show graphs for the other main components of the V-Dem data as well.

Readers of this blog and my other work will be familiar with my skepticism of the prevailing narrative of the timing of and character of Turkey’s democratic erosion. As I wrote in a recent blog post:

“Given recent crackdowns on freedoms in Turkey, it might be useful with some perspective. Some in the media still seem to be pushing the talking point that Turkey’s “true oppression” began in 2013 after a corruption scandal, contrasting this period with that when AKP was a “beacon of light”, when Turkey was a “vibrant democracy”, and when “Erdoğan’s Turkey” was on the “right path.” Accepting this narrative is a convenient exit for analysts who have overestimated the degree to which Turkey’s democracy was improving during the last decade.”

As it turns out, the data recently provided by V-Dem has something to say about this.

As for the data itself, V-Dem’s measure of liberal democracy explicitly emphasizes:

“the intrinsic value of protecting individual and minority rights against a potential “tyranny of the majority.” This is achieved through constitutionally protected civil liberties, strong rule of law, and effective checks and balances that limit the use of executive power.”

V-Dem’s data also extends all the way back to 1900, but for the sake of precision (and relevance) I’ll start the series in 1950, with the election of Menderes and his Democrat Party, to the government. 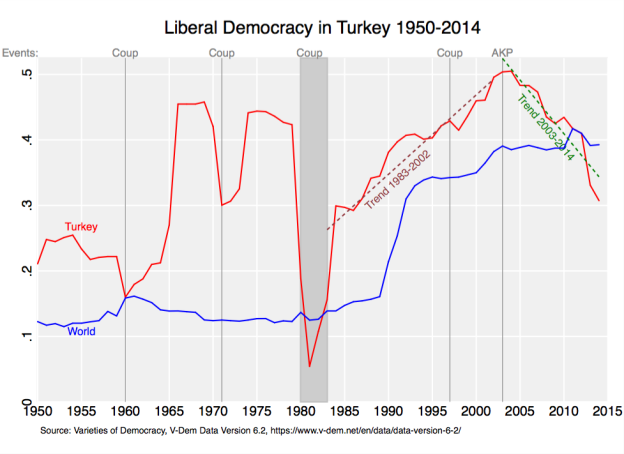 The data series for Turkey shows decreasing levels of liberal democracy under Menderes, cut short by the 1960 coup, after which the values increase substantially until 1966 (interestingly, this is likely to give new wind to those claiming that the 1960 coup constituted a “democratic coup“). The period around the 1971 coup shows significant a deterioration but not as forceful as that of the 1980 coup, which brought resulted in the data series minimum value. After the return to popularly elected governments in 1983, Turkey experienced a clear positive trend in liberal democracy all the way up until 2003. At this time, the trend reversed, and for the entire duration of the AKP’s rule, liberal democracy in Turkey has been decreasing. It has not only been decreasing in an absolute manner, but it’s also falling relative to the world average level of liberal democracy and, as of 2013 and onwards, Turkey’s is less liberal than the world average. Finally, the decline in liberal democracy during the AKP’s decade-long rule is very similar, in magnitude, to the two-decades-long increase that preceded it. AKP has thus been twice as effective as its predecessors in democratic reform, just in the opposite direction

This phenomenon is also held up when looking at V-Dem’s alternative measures of democracy (see here for details on the different measures), including indices for participatory, deliberative, egalitarian democracy, and polyarchy, defined as follows:

“the process of increasing capacity for women, leading to greater choice, agency, and participation in societal decision-making. It is understood to incorporate three equally-weighted dimensions: fundamental civil liberties, women’s open discussion of political issues and participation in civil society organizations, and the descriptive representation of women in formal political positions.”

To various degrees, all democracy indices show a similar hump-shape around 2002, with the period leading up to this year exhibiting increasing values of democracy and the period afterwards exhibiting decreasing values. For the gender index, the post-2002 values are overall higher, shows no significant trend break from the period before. In relative terms, gender rights in Turkey is increasingly falling  behind the world average.

Putting Turkey’s democratic reversal in a geographic context,  the below graph again uses the liberal democracy measure, but here compares the Turkey time series to those of the median values of selected geographic regions (i.e. all the main ones except North America and Oceania. Also, I use the median as opposed to the average in order to capture a more representative country within each region, rather than the simple world average used above.)

In this context, Turkey’s democratic decline after 2002 looks quite concerning. Whereas before 2002, Turkey was converging toward both Latin America and Europe. Afterwards, however, the institutional slide has brought Turkey to the point where it’s below the median African country and is converging toward Asia and the Middle East. Although Turkey was closer to the median European than the median Middle Eastern country back in 2002, a decade later it is quite the opposite.

It is noteworthy that, despite the numerous constitutional amendments and legal packages passed under AKP, there is little to show for this in terms of democracy. If this wasn’t the work of an “enlightened advocate for enhancing democracy” (as the NYT editors initially considered Erdoğan) then what was it? An alternative explanation is that the last decade has had little to do with democracy but rather a shift in power from one set of autocratic elites to another. And the data seems to support this version of events more than the “would-be democrat gone rogue” one.

A counterpoint is that liberal democracy is simply one out of many types of democracy and the illiberal shift under AKP has occurred with a popular will and free and fair elections. I therefore leave the reader with a last graph of V-Dem’s measure of Clean Elections Index, which emphasizes the “absence of registration fraud, systematic irregularities, government intimidation of the opposition, vote buying, and election violence.”

Focusing on the period after the reinstatement of democracy in 1983, the post-coup, pre-AKP, era saw the cleanest elections in Turkey’s history according to V-Dem, and a subsequent decline following the coming to power of the AKP. In 2014, not only has the state of clean elections in Turkey fallen to the point of the world average, but it has also reversed to where it’s value is indistinguishable from what it was in 1950.

In short, feel free to pick your most (or should I say, least?) favorite takeaway from this: be it that the AKP has been twice as effective in reducing liberal democracy as its predecessors were in increasing it, or that Turkey is today significantly – at least in terms of political institutions – more Middle East and North Africa than Europe. But regardless, the talking point that the AKP has been promoting democracy for any durable period of its tenure, in any of the rigorous ways V-Dem measures it, is simply not supported by state-of-the-art data on democracy. In other words, it may be time to bury some talking points on Turkey.